Every now and again I have a client or customer who asks me to cast a spell for them. Now, I first must say that these are typically people who have little or no magickal training and because of literature, television and movies believe that that's what witches do. We cast spells for people. They don't mean to insult, but are looking for special help.

. It is quite likely that witches of antiquity cast spells for people, as that is what they are rumored to have done, and would have had the knowledge and experience with which to do so. Since the creation in the early 1950's of Wicca, 'the religion of the witches' founded by Gerald Brousseau Gardner (1884 - 1964), which started the modern movement of witchcraft, a popular concept has been that we do not cast spells for others.  Why this was set forth by some of the pioneers of the witchcraft movement I don't know for sure, but I personally feel that it is important for one to cast ones own spells.

I can only speak from my own experience rather than what others have said we should or shouldn't do. In the beginning, yes, there are rules and recommendations as to what one should do, how to do things such as rituals, and what isn't recommended to do.  Starting any new path, or interest, requires one to learn the 'ropes', the foundational principles of the thing. But eventually, you need to determine for yourself what works for you, what serves you and what does not serve you. Then you can pick and choose, always learning who and what you are in the process.

And .  .  .  to be brutally honest with you, the scenario of a spellcaster, charging money and then performing spells for others often becomes what it is, a rube being taken by a charlatan.  In today's lingo, a victim and a fraud. Because by casting a spell for another, you will more times than not fail to achieve the desired manifestation and then what happens? I've never heard of a person getting their money back if the spell doesn't work. Oh, and they don't .  .  .  work, that is.  I've spoken with many victims over the years, who have come to my store and have told me of their experiences with spell casters who had charged, in some cases, hundreds of dollars.  One poor man had spent $300 on a bar of love soap, over the Internet. When the soap failed to stop his wife from divorcing him, he tried to get his money back and found the site to have been taken down leaving him no recourse.

Now, mind you, we sell love soap at Enchantments Witch Shoppe, at a mere $4.00 a bar, and it is intended to bring loving energies into your life, making you more aware of your loving nature and that of those around you.  We would never tell someone that it could be used to manipulate someone against their will. His wife wanted to leave him, period. A bar of soap wasn't going to change that, anymore than it did.  It's just too bad someone using the title witch was the charlatan who defrauded him, a criminal act.  I think that perhaps the original founders of modern witchcraft wanted us to stay away from charging money and doing magick for others simply to keep the law and the abiding of the law clear and un-muddied.

Today I unfortunately find that there are two groups of people wanting to do spells for others. The first we already discussed, a charlatan or fraud seeking to make a business out of cheating people. The other is more innocent. New students on the path that want to help others. I strongly caution against casting spells for others to my students, simply because I have seen over the years those who have gone in this direction and then in a night and a day they are 'experts' who are charging money and really have no experience or true knowledge of what we do.

By charging money and doing the magick for others it endangers one to fall into a mighty power-trip. Once there, these people do our world no favors, and help perpetrate the negative stereotypical image of the witch.  But new students need to know that it is better to help someone do a spell for themselves rather than to do it for them. If it is to work there must be a need, and the need should be present in the actions of the person the spell is intended for.  We don't cast spells on others and we do our own spells, period.  That's just good witchcraft. 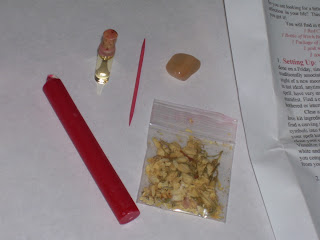 I have created and sell in Enchantments store simple spell kits. These kits, retail at $9.00 each and contain a completely written spell I designed, and a candle, a stone, some herbs and other tools or ingredients specific to the spell. We have spell kits for love, money, health, animal magick, tranquility, medium kit to help communicate with the dead, develop your psychic powers etc.  These kits allow first time spell casters to do their own spells and create their own magick.  If you want to start casting spells the only thing is to do it! get a spell kit and start.  Happy Spell Casting!


© 2010-2011 Enchantments, LLC Portions of this blog posting may include materials from my book “Enchantments School for the Magickal Arts First Year Magickal Studies.” For more information, see www.enchantmentsschool.com or go to the title of tonight's discussion and click, it will link you to my school's website.

If you know someone who would like my work, please send them this link. If you or they would like to be included on our daily email distribution list send me an e mail with your email address to be included. If you ever wish to unsubscribe to this blog, please contact me and you will be immediately removed from our list.
at Thursday, December 29, 2011