Now we tackle 2012! Also answers to some recent comments.

While warmly enclosed within my witches cottage, a fire crackling on the hearth and a snow, ice, sleet and rain storm hammering down outside, I thought I'd have a lively discussion with you. Grab a cup of tea, or maybe mug of hot cocoa and let's discuss some of the comment's I've received since we last talked.  Then we'll dig our teeth into a meaty subject, the 2012 controversy.

First, we last visited while discussing the 13th astrological sign and all of the consternation it was causing.

Autumn wrote:  "I have always been a cancer. What I am finding very perplexing at the moment is that up until about halfway through this past summer I was everything my sign claimed me to be, and I loved the water. However,since about August, I have been very different. I read through Gemini, which the new zodiac says that I am, and it is actually far more accurate than Cancer was. What's the deal with that?"

A very good question Autumn.  You also seem to have a good sense of self awareness and that's important. Well, I mentioned briefly in my last discussion that we are not all fully developed as whatever sign we are born under. We tend to have aspects of every astrological sign within us, even in small amounts. If you were to read through all of the signs, I bet you could relate to at least one characteristic for each one.  That doesn't make you not an authentic Cancer, it just speaks to the characteristics in twelve signs attempting to generalize millions of individuals.

Of course to really get the specifics for you, you would need an astrological chart done, in which you use the exact minute of your birth, day and date.  A trained astrologist can read your chart and tell you some very personal, individual aspects of you that aren't the same for everyone.


Then again, I did say if you wanted to follow the Sidereal Zodiac and consider yourself, in this case a Gemini, by all means, do so.  Just be sure that you don't read the Gemini horoscope as your personal horoscope in your local paper, as that is synced up with the Tropical zodiac as discussed.  In the magickal world it is important that we consider many areas of our development for insight into our lives.  I find insight by reading my horoscope, by reading my animal medicine cards, throwing the witches runes, doing path working and meditation. I use the Ogham, the tarot, and crystal ball all to give me brief glimpses of my life and the world around me.  Does it give me all the answers? No. It just gives me a better insight and hopefully an edge I wouldn't have otherwise.


Another reader CabynFevr  says:  "I would LOVE to hear your opinion on 2012! I think they simply got bored...or maybe ran out of tablets or ink or whatever the heck they wrote with! Maybe they just forgot to buy a new calendar? I don't mean to poke fun at the believers, I'm just not one (at least I don't think I am! What about the birds? The fish? The Pats losing to the Jets?)
Thank you for clearing up the confusion about the Zodiac"

Ha!! Thanks for the giggles!  Let me start at the end of your note, I don't bet or make predictions on sports, as I don't really follow any. But like any game played, someone must win and someone must lose. Its the nature of the games. I do enjoy how it bonds people in friendly competition.

The birds and fish. I could add to the list the bees, bats and rain forests which are disappearing. Unfortunately it has little to do with magick or nature, what is happening in our environment. Scientists are still trying to decide what is going on, but I feel it is simple mathematics. Add the over abundance of the human population with a disregard for the environment, and we succeed in destroying another bit of nature or coming up with a minus figure.  Over the centuries we have done this many times. What is different this time around,  is we are  technologically advanced and evolved enough to know we are doing this as we are doing it. I wonder if we'll be able to make the leap needed, to stop our damage before its too late. Hmmmm, we'll have to see. 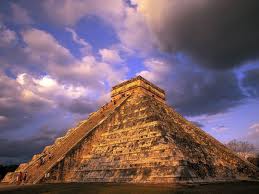 
Imagine scary, threatening music inserted right here. 'Da, da, da, dum.'  Lightening crashes and thunder booms!  Oh my! Let me say there is so many rumors, beliefs and superstitions concerning this mythology, its hard to know where to start. I'll keep it simple. The basis of the plot is it is believed that in 2012 the earth will come to an end. No really.   The story goes something like this:  The Mayan Civilization's calendar predicts the end of the world on December 21st, 2012.

Yes, I believe that the human race has evolved enough to destroy our race and most living animals on the planet.  But .  .  .  we do not have the technology, yet,  to totally destroy the planet. In fact some experts believe that should the human race cease to exist tomorrow, that in a mere five years the earth would reclaim itself and little of human creation would exist.  I don't know if I believe that as some of our man made structures are pretty amazing, but the point being a valid one, that the earth would shake off the damage we have done and before long would be as good as new.

This 'doomsday' or end of the world scenario was supposed to have been recorded by the ancient Mayans who were a great civilization located across Central America, that lived a thousand years ago and died off in the 1300's.

The ancient Mayan calendar marks the 2012 date as an end of a 'long count'.  A long count is a time span of 5,126 years. Mayans measured time in segments called ba'k'tuns.  A total of 144,000 days or segments would add up to approximately 394 years. Thirteen ba'k'tuns would equal one Long Count, and the current Long Count, which began in 3114 BCE,   is now scheduled to end  in 2012 CE.  The Mayans were known for their astronomy and I believe it likely that this measure of time corresponded with an astronomical calendar they followed.

Interestingly the urban legend that has sprung up around the 2012 date which again is most commonly stated as:  The Mayan Civilization's calendar predicts the end of the world in 2012'.  A seemingly obvious point becomes glaring when this statement is considered.

If the Mayans had made such a prediction, they were simply wrong.  By about 700 years give or take. The Mayan civilization experienced a major and total collapse around the year 1300.

Trying to understanding the world at this time in history, it  is important to see how very small the world was for the tribes that inhabited the earth. With travel restrictive and difficult, the world consisted of the civilization or community one lived in.  Even for the Celts, a wandering nation,  the world consisted for them, of them.  Yes, there were other civilizations and tribes one encountered, but predictions concerning ones world would be specific to their world. If the Mayans had predicted an end of the world, it makes sense they would be referring to the end of the Mayan civilization. If they had predicted this they were simply wrong.

I said if, because the really interesting thing about this entire story.  .  .  is they never did. Predict the end of the world, that is.  Or doomsday. Or anything of the sort. The Mayan civilization left behind written accounts and records so we have much information about their culture and how this civilization lived, and researchers  and scientists have never found any written record of ancient Mayans predicting the end of the world.

They also never mention doomsday or an equivalent of any sort.  They never mention the 'Long Count' and mention of the year 2012 is not found. Not even once. The winter solstice of 2012 was never even mentioned.   The Mayans wrote and recorded their experiences by using a complex system of hieroglyphics, so we do have historical records. None of these records mentions 2012 or the end of the world.

How it got from a notation regarding an end of an era, like the ending of the age of Pisces and the beginning of the age of Aquarius to the 'end of the world' da, da, da, dum!!  I don't know if anyone knows who got this ball rolling, but it will roll until it stops at the end of next year.

Until then the story will persist. And its a good one, I don't deny it.   Oooh, I can feel the goosebumps. It's not a matter of making fun of  'believers',  because I have a really hard time believing anyone gives this nonsense any credence. Truly you can and we have,  wrapped it up in a Hollywood movie, written all sorts of books about this topic and the authors are oh, so very credible.  I've myself have watched a number of very well done documentaries that give some very convincing arguments.  Yet it doesn't change the fact that its all a bunch of unsubstantiated rumors with no historical evidence to back it up.  Can I be more clear? It's a fake, a hoax and I personally feel that those who spout this type of nonsense do so to either make money and or to build themselves up while frightening others. Shame on them! tsk, tsk.

It also hadn't escaped my witches notice that the supposed end of the world was conveniently placed on an ancient pagan holiday, our winter equinox and Yule Sabbat.  Why not a Tuesday in June? Shouldn't the end of the world rate it's very own day!! I mean really.

Now perhaps if the money that has been spent on this silly 'prediction' that was never predicted by anyone,  could be directed towards the scientists trying to determine the loss of our bats and bees, we might be able to do some real good for the earth.  We will talk more about our vanishing roommates on earth at another time.

So, whose having a party to celebrate the world not ending?  I'll bring the sparkling juice!!


© 2010 Enchantments, LLC Portions of this blog posting may include materials from my book “Enchantments School for the Magickal Arts First Year Magickal Studies.” For more information, see www.enchantmentsschool.com or go to the title of tonight's discussion and click, it will link you to my school's website.

If you know someone who would like my work, please send them this link. If you or they would like to be included on our daily email distribution list send me an e mail with your email address to be included. If you ever wish to unsubscribe to this blog, please contact me and you will be immediately removed from our list.
at Tuesday, January 18, 2011