How Women Were Tortured and Suffered For Our Right To Vote 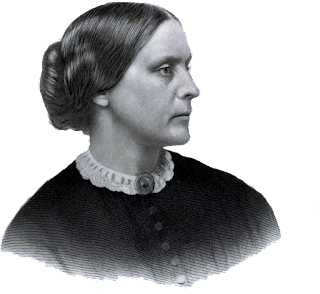 For those who know and understand the path of the witch, they know that witches, both women and men were the original feminists. It was a world wide movement during the burning times to eliminate the worship of the Great Mother Goddess and with Her, to denigrate her image, the woman.  The woman who had knowledge, power,  wisdom,  strength and magick within her. This, then and now, has always struck fear deep into the hearts of some men who are incapable of appreciating and accepting women as equal partners of the human race upon earth.

During the early 1800's when the movement started, the lot of a woman was a frustrating one. There was a common belief by many at the time of the "Cult of Womanhood" where women were only considered acceptable  as long as they were pious, submissive, and womanly attending to home and children and of course her husband. Women were not  allowed to own property, and needed to have a man be her guardian and could not possess any money. Many women worked outside of the house in factories during the Industrial Revolution and made money but it was not really theirs and was handed over to the man of the house.

As ridiculous as some of the below reasons sound, this is a list of possible reasons a woman could be committed to an insane asylum in the late 1800's. This is an actual document from the Trans-Allegheny Lunatic Asylum in West Virginia. 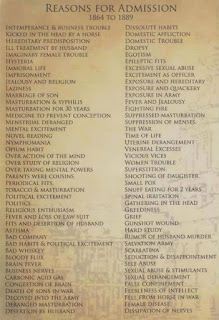 Some of the more unbelievable reasons in this list e.g. being involved in politics, mental excitement (which could simply be being pissed off at her restrictive life!),  keeping bad company, even desertion of her husband! But the lot of the woman gets much,  much worse as the 19th century continued.

During these 100 years of asking, demanding, protesting and marching on Washington to somehow get the Government to consider passing an amendment allowing women to vote, as the end of the 1800's came about, so many other horrible things happened as well.  During what started as peaceful protests women were arrested, jailed and tortured by being force-fed, which for some, happened hundreds of times. They were starved, they were beaten, humiliated, verbally harassed, restrained and some committed to lunatic asylums.  Those were just the stories that the women involved admitted happened to them. 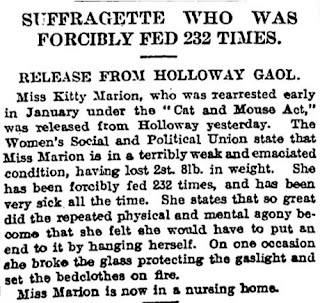 I believe this above newspaper article  refers to a woman in England, where women were suffering the same abuses and also working very hard to get their right to vote granted in England. This really was a movement that affected women on both sides of the Atlantic. 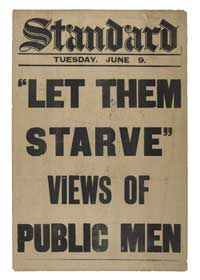 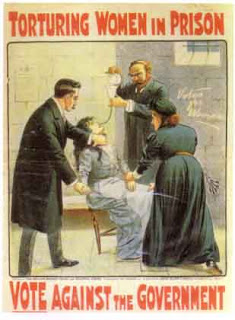 Many women, like Susan B.  Anthony, who spoke eloquently all around the North East about women gaining the right to vote and to participate in the political process, as well as becoming full citizens in their own right, worked tirelessly for decades. Sudan B. Anthony, herself,  passed away before she could see her hard work come to pass. It was another 14 years after her death before the 19th amendment was passed in Congress.

My research revealed another shocking fact concerning this amendment. Whereas the 19th amendment was passed in 1920, the last state to ratify it, was Mississippi, over 60 years later, on March 22,  1984!!!  Yes, it has only been 32 years since every state in this country has legally recognized the rights of women to vote!

I personally do not care who you choose to vote for. That is and always has been a personal choice which I respect. But please, if you are a woman, or if you are  a man who respects and believes women to be equal,  please cast your vote on Tuesday, November 8,  2016. To simply not bother because you do not think a single vote counts,  .  .  .  oh yes it does.  While, with the electoral college, perhaps a single vote might not make a huge difference in who gets into office, that single vote, every single vote cast by an American citizen makes a patriotic difference that goes back to 1776 when we won our freedom from an oppressive Monarchy and we won our right to vote for our representatives in local, state and federal office.  And every single vote cast by a woman again cements her right and privilege to be considered a full citizen of this country with all the freedoms, all the equality and all the benefits thereof.

Women today do not have the real memory of what our predecessors had to got through. But the Internet brings the documents, the research, the newspaper articles, and the diary accounts back to life for us to read, and learn and understand exactly what casting a single vote means.

One of my students told me in class  this morning, that she had not voted since Ronald Reagan ran for President, but she had in her hand her voter registration certificate and wanted me to know that she would vote in this election because I have been so passionate about our rights as women and as Americans.  That was so rewarding and touched me deeply.

For the same rights that protect Witches, Pagans and Wiccans in this country also  protect the rest of us. We are No LONGER separated in our Constitution, or by our Federal laws by gender, religion, race, culture, and hopefully soon sexual orientation will also no longer be a reason for separation or exclusion. We have come so far as a country and we can make a difference in the world we live in, just by casting a vote.

The same base reason that started the persecution of the witches during the burning times is the same base reason for all  of the other prejudice and bias. FEAR. Prejudice, Hatred, Hate groups, crimes against those who look or seem different are all motivated by fear, many times covered over by anger.
Right now, our country is being held tightly in a fist of fear and anger.  I do not know how this election will shake out, I have refrained from checking my crystal ball,  haha, but I do know by casting our votes it will break apart this energy and hopefully allow a new breath of sanity,  understanding and acceptance to come back.  A single vote can do this.

Please consider doing this on Tuesday.

If you know someone who would like my work, please send them this link. If you or they would like to be included on our daily email distribution list send me an e mail with your email address to be included. If you ever wish to unsubscribe to this blog, please contact me and you will be immediately removed from our list.
at Saturday, November 05, 2016