The War Between the Oak King and the Holly King 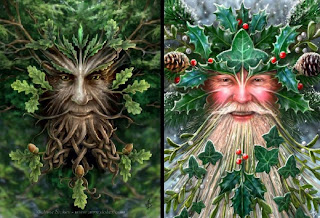 Merry Christmas, Happy Yuletide, Happy Hanukkah, Season's Greetings to one and all,


There is an ancient Celtic story that has been told throughout the centuries since at least King Arthur's time, if not before. It is the story of the Oak King and the war he has every year with the Holly King.
It is a war, a battle for dominance, if you will, that takes place each year at the Winter and Summer Solstices.

In Celtic mythology, the Holly King is considered a dark king and his image is a wren, whereas the Oak King is a King of light and his image is a robin. They are brothers but also adversaries each fighting for dominance over a half of the year.

The war starts again at Midsummer, Litha, the Summer Solstice and the Holly King and Oak King fight for dominance, with the dark Holly King winning and he reigns from Midsummer until Yule when the war starts again.  He represents the upcoming winter, the dying of the fields, the decomposition of the leaves in the forests as it turns to humus. In addition to the darkness, the Holly King represents the inner mysteries and hidden knowledge.

He reigns until Yule, the Winter Solstice, the Christmas Season. For the ancient Celts the Yuletide, Winter Solstice represents the re-birth of the Sun God, the return of the Sun and the lengthening of the days. Then they battle, the dark Holly King and the light Oak King and the Oak King wins the battle at Yule and reigns until the Summer Solstice. He represents growth, new abundance, fertility and everything new.

So right now, a few days after Yule, the winter solstice which fell this year on the 21st of December the Oak King is reigning supreme. It may not seem like it, with freezing temperatures, snow fall imminent and ice and cold an everyday occurrence, but each day the light remains just a little longer. The nights grow a little shorter, and by the beginning of February we shall see small, tiny glimmers of spring. The Canada geese start flying back, the ice starts to break up in the rivers, warming trends start to appear. Then the Oak King's season of light and warmth becomes more apparent.

This war happens every year, and it most likely started as a story created by the ancients, as so many stories were to help explain to the children and the people the turn of the seasons, the natural world around them. The Celts were known for their storytelling and the story of the battle between the Oak King and the Holly King was told for centuries until it finally found it's way into modern literature. It is found in literature such as the Golden Bough written by Sir James George Frazier originally published in 1890.  Robert Graves also mentioned the legendary battle in his book The White Goddess published in 1948.

Both of these classic publications are part of a formal basis for early Pagan practice in the late 19th and 20th centuries.  If you can get a copy of these books you are fortunate indeed. The battle of the Oak King and Holly King, continue each year and as one gives way and the other takes over and then they switch every six months, it also notes how the ancient Celts saw the Year split into two halves, the light half and the dark half. There are, of course variations, as are typical for a legend that spans centuries. Some during the past have recognized the Kings taking control over their half of the year at Samhain and Beltaine, so each was in his full glory by the time their respective Solstice came along.

For scholars of Celtic mythology, there are many stories which discuss various concepts of history, nature and magick and for those who wish to read even more you can get a copy of the Mabinogion, which is a Welsh book of Celtic stories which were orally passed down and originated in the 12th and 13th centuries. It was then first published in print in 1838.

There is so many stories and history surrounding Yule and Christmas, I wanted this ancient story to be told once again.

If you know someone who would like my work, please send them this link. If you or they would like to be included on our daily email distribution list send me an e mail with your email address to be included. If you ever wish to unsubscribe to this blog, please contact me and you will be immediately removed from our list.
at Monday, December 26, 2016