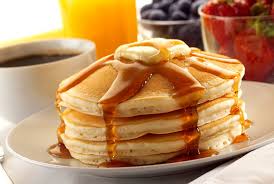 Yesterday was a holy day for some Christians called Shrove Tuesday. Shrove is another word for 'shrive' which means to confess. It, at one time, was a day for introspection and looking at your life in ways that you could change for the better. The day has also been called,in various cultures, Mardi Gras and Fat Tuesday, and has traditionally been a day to 'pig out' right before the 40 day restrictive period of Lent. These 40 days Christians typically deny themselves of certain 'fun' foods, foods they have little resistance over or foods they crave.

The making of pancakes came from the Fat Tuesday concept of using up perishable foods and getting rid of tempting foods right before Lent, like eggs, flour, butter and sugar. Pancakes and syrup make for the perfect food to use up all of these tempting food stuffs. But, let me tell you something you might not have known about the humble pancake.

It has a magickal history, long before Christianity and it comes from the Slavic regions of Eastern Europe. Cultures, everywhere, before the introduction to Christianity to Europe in the 600 c.e, era, were magickal people. They saw magick in everything and all around them. Nature was especially magickal as the peoples of this time lived with nature, a part of it, whereas today we tend to live in spite of nature. Well, for people of these magickal times, they used a magickal system called sympathetic magicks.

For instance the Slavs saw the warm, golden brown pancake as a symbol of the life giving Sun in the heavens above. They felt that by consuming the hot, sweet pancakes they would bring the life giving energies of the Sun into their bodies and into their lives. They were helping the Gods to banish the evil forces of winter, coldness and sickness that often comes in the wintertime. They felt the golden pancakes would return the Sun to the sky and warm up the earth in preparation for spring planting. Of course when the Slavic peoples of Eastern Europe were consuming the pancakes they weren't doing it before a period of fasting. They would eat, when they had plenty of food, as a celebration and of giving thanks for the abundance that would nourish them and keep starvation at bay. Today the Polish people call pancakes Nalesniki. You can find pancakes in many, many cultures around the world. Some are eaten sweetened and some savory.

Unfortunately, for the tribal peoples that inhabited Europe at this time, before Christianity, there was all too often, times of starvation and want. Food was primarily hunted and gathered, before the introduction of agriculture, which was started when the first seed was planted by a human and watched over and nurtured until it was harvested. But thousands of years passed when humans roamed the earth before that first seed was planted. And want, starvation, malnutrition and death due to these factors was common and occurred in every village, every winter.

Pagans did not need a enforced fasting time, that later Christians adopted as part of their religious practice. Modern Pagans still do not often bring fasting into their spiritual practice, unless it is a personal choice. We understand the Goddess and God have given us everything we need on this earth. We simply need to make wise choices on how to use what we have.

And interestingly enough, those Christians or Holy men throughout history that have a story of fasting or giving up of material things, it's important to understand where they were coming from. They weren't giving up of material things or refusing to eat certain luxury foods because they were martyrs, not at all. They simply put aside, that which no longer served them. They weren't depriving themselves at all. They still ate and drank. They still wore clothes. They simply put aside the material things they had no further use for in that part of their lives. There are some people today who choose to live a simplistic life, for this same reason.

In some parts of Scandinavia, peas and salted, preserved meat is eaten and in other parts a rich, hearty pea soup, honoring the early spring pea, one of the first vegetables able to be harvested after winter, is consumed and spring is celebrated.

So it is up to you whether you eat the pancakes or not. But never give up something because you feel that by deprivation, suffering and want it will grant you points in the after life. Life is for living, enjoying and loving. Embrace it all! Enjoy it all! Take all you can get and live your life to the fullest!
Leave the suffering to the martyrs. And, have a pancake or two! 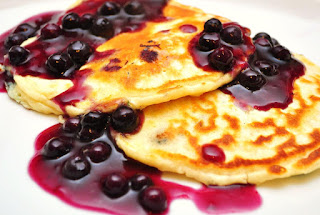 If you know someone who would like my work, please send them this link. If you or they would like to be included on our daily email distribution list send me an e mail with your email address to be included. If you ever wish to unsubscribe to this blog, please contact me and you will be immediately removed from our list.
at Wednesday, February 10, 2016