Mistletoe as part of the Christmas/Yuletide festivities 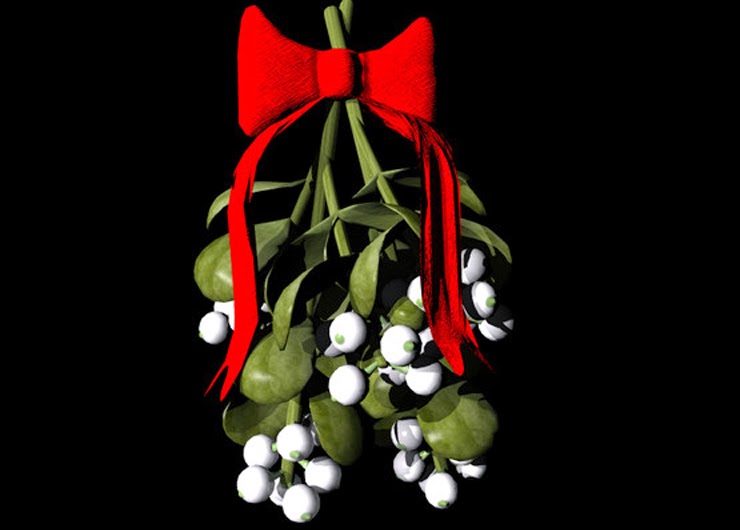 The small, unassuming mistletoe has a vast history that goes back to the first century A.D. when the Celtic Druids would harvest it from old oak trees. There is a legend that the druids would hold a  white cloth underneath an oak tree while one would climb the tree and cut the mistletoe with little gold knives. The mistletoe would drop into the cloth, thus never touching the ground. It was then used as a cure all for all sorts of illnesses and maladies. It was a plant from 'between the worlds' which made it sacred.

By being 'between the worlds' means it was an air plant. It didn't need sol to grow. It grew on branches of the Oak tree, deriving it's nutrients from the tree and from the air around it. Thus being an 'in-between' being. The druids felt anything in-between was sacred. Such as ice. It's water, but it's a solid. Mist or fog, also water but it acts as air. The time of day which is midnight. That stroke of midnight isn't today, nor is it quite tomorrow. All of these things were considered 'between the worlds'.

Mistletoe also had the ability to bloom in the dead of winter, showing an evergreen, living ability when surrounded by the cold, harsh, death of winter. This made it extra special for the druids.

Some time in the Middle Ages, mistletoe was brought into the Christmas holiday festivities. At first it was used by the servant classes and used to procure a kiss from an unsuspecting female who happened to be standing directly underneath a sprig of mistletoe. It was considered bad luck to refuse the kiss. After a kiss was had, a white berry was removed from the sprig. This kept on until all the white berries were removed then a new sprig had to be used.  Soon mistletoe moved into the upper classes and remains to this day a part of this holiday's festivities.

Be careful if you use mistletoe as it is poisonous to pets and people alike.

Happy Yuletide and Merry Christmas to you!!

© 2010-2014 Faith M. McCann. Portions of this blog posting may include materials from my book “Enchantments School for the Magickal Arts First Year Magickal Studies.” For more information, see www.enchantmentsschool.com or go to the title of tonight's discussion and click, it will link you to my school's website. Please note that the copying and/or further distribution of this work without express written permission is prohibited.

If you know someone who would like my work, please send them this link. If you or they would like to be included on our daily email distribution list send me an e mail with your email address to be included. If you ever wish to unsubscribe to this blog, please contact me and you will be immediately removed from our list.
at Thursday, December 18, 2014