Pagans and Witches Do believe in a God, Here Let Me Explain! 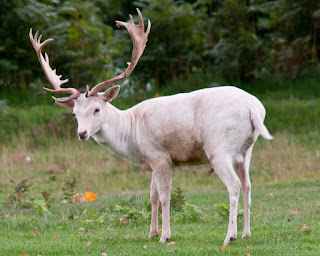 It has been a while since we chatted, but I've been off doing mysterious witchy things! I had a lovely discussion yesterday with a  good friend and during the conversation she mentioned, "So, I take it you don't believe in God?"  Well, I love a good opening which allows me to explain a bit of our beliefs and customs as a pagan and a witch.

I told her, that of course we believe in a God and also a Goddess. Whereas I know some pagan or witch groups focus pretty heavily on the Goddess, some exclusively, I and many others, tend to focus on both. For, truthfully, the world is inhabited by species of both genders and both the feminine and the masculine have a purpose and place in our world.

The picture I chose  above, of the white stag, is a symbol of the God, actually any horned male  animal in nature represents the God to us. This is one of the reasons the early Christians, trying to convert the pagan populace to Christianity created a devil with horns. By vilifying the horned God and making him into an evil creature they hoped to shift the focus to their Christian God.

When she asked if I believe in Jesus, I answered, but of course. I do believe he lived  and had a strong influence on the people of the day, that has continued to this day. But do I believe in him as the savior of my soul? No. As pagans, we live an enviable existence where we don't need to be saved, we are perfect just as the creator  made us. And when I say perfect, that is in every aspect. Whether you are handicapped, fat, thin, tall, short, quick witted or slow, it matters not. In the eyes of our creator, most commonly thought to be a mother Goddess, we are perfect. Now, that does not  mean we do not try to become better people, to help others and try to leave aside those attitudes and behaviors that do  not serve us any longer. We do have work to do. But that very fact does not  make us any less  perfect.

I believe that Jesus lived as I believe the Buddha lived, as well as Krishna, Allah, Mohammed. There have been many,  many magickal masters that have come to the earth to tell the earth's people of their message of love and acceptance.  But, my God and Goddess comes  from a time far earlier than any of these masters.

Many of us believe in the God/ Goddess energy that started at the beginning of creation. The original big daddy or mommy if you will!  There is archaeological evidence, that has been unearthed, of  mother Goddess figurines that have been carbon dated as old as  800,000  to  1 million years B.C.E.
Such as this figurine called the 'Achuelian Goddess" 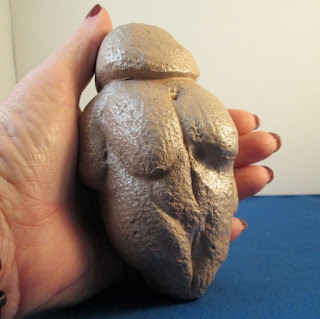 This picture is a replica of the original Achuelian Goddess, so named because she was dated to the Achuelian period, which is the lower paleolithic and was thought to be created by individuals called Homo Erectus. It is considered to be the oldest human created art form ever unearthed, up to this point in time.  It shows the faceless body, as in the earliest days, Goddess figures did not have a face, as She was every woman. The figurine has large breasts and the genitals are made obvious, because She was the one who gave birth to the world. This made a lot of sense for ancient mankind, as they looked around the world for explanations as to their existence, and saw the female of all of the species gave birth, so therefore the creator of all must be female.

The modern era concept of a creator being male comes from the warrior races that originated in the Mesopotamia region, such as the Huns, the Goths and like races that eventually overcame the Goddess worshiping, agricultural, hunter and gatherer races. Eventually, the Egyptians, the Romans, the Greeks, and then other cultures and races were either overtaken by force or eventual conversion culminating in the burning times which almost eliminated the Goddess cultures from the earth.

Note that I said,  almost. Considering the many methods employed during the hundreds of years of the Burning Times, it is almost inconceivable that the concept of the great Mother Goddess survived, but She did.

It is due in large part by anthropologists and scholars such as Dr. Margaret Murray and Robert Graves and their books detailing the ancient Goddess cultures, that allowed this belief system and religion for some to be resurrected in modern times.

One cannot simply look at a Pagan or a witch and think they know of who and what we are. For so many of us, our history, which stretches back through time, hundreds of thousands of years, to the earliest tribes, the earliest people  on the earth and culminates in a diverse, colorful, rich and satisfying lifestyle and  religious belief.  To  know us, to understand us, one must do a bit of research and study.

But,  know absolutely, that we do believe in a God and a Goddess, for many of us, we believe in aspects of the Great God and Great Goddess as  many gods and goddesses, similar to a Catholic who believes in many saints. It is similar to that concept. But we are, by no means, godless. Pagan does not mean Atheist, it does not mean Agnostic. From my personal experience pagans and witches are deeply spiritual and rather than thinking about our God and Goddess on Sunday or on holy days, our God and Goddess are an integral part of our day to day lives.

We see our creator represented  in every flower, tree, rock, mountain, stream, river, ocean, cloud, drop of rain, blade of grass, weed, seed, bird, animal, fruit and vegetable. We also see our creator in every human, as we are all part of the great creation.


To answer the question, yes, we do believe in a God.

If you know someone who would like my work, please send them this link. If you or they would like to be included on our daily email distribution list send me an e mail with your email address to be included. If you ever wish to unsubscribe to this blog, please contact me and you will be immediately removed from our list.
at Monday, August 29, 2016