The Tragedy at the Tiger Temple 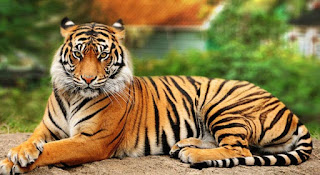 I had initially planned another discussion for today, about candle magicks and how they sync with the magick of the days of the week. I will get back to that in just another day or so. But, a new topic, has become very important that I share with you.

The sickening tragedy of the tigers housed at the Tiger Temple in Kanchanaburi Province, Thailand in a Buddhist Monastery. Now, let me initially state, that many, many Buddhist's, whether monk or not, are very often spiritual, loving and kind persons. At least the ones I have met. But as with any group or demographic of humans, there are always those who are swayed not by the good that life has to offer, but by the evil, dark forces of wealth, abundance and luxury which at times can cause a person or persons to do unspeakable cruel things to gain the monetary excess they desire.

I am afraid, this is the case with the monks at the famous Tiger Temple in Thailand. This temple has become famous with tourists from all over the world for allowing people to walk the seemingly docile tigers, have their pictures taken with them and to pet and touch these sacred beasts.

But truthfully, tigers are wild beasts that are not docile and should not be treated as a 'family'pet. After many complaints from caring, compassionate tourists who witnessed things that seemed wrong, such as regular feeding of drugs to the tigers to keep them quiet and docile, as well as the sale of trinkets made from tiger's bones and tiger skins, finally, the Department of National Parks, Wildlife and Plant Conservation (DNP) raided the temple last week and rescued 137 live adult tigers. In their search of the facility they also found 40 frozen tiger cubs they believed were to be sold for various and sundry illicit reasons.

There is also a belief that the monks sold tigers for their meat to restaurants in Thailand that have tiger meat on their menu for tourists. The temple's Abbot, Luang Ta Chan, is upset by the 'robbery' of 'his' tigers. He was expected to speak of the situation to reporters this week, but instead rolled through the crowd of reporters and tourists on his gold cart and waved at the people. Hmmm, a Buddhist monk on a gold cart? That kind of puts it all in perspective, at least for me.

All he could say was the DNP taking his tigers has destroyed his life. Not one word mentioned as to the welfare of these big cats and what they had been subjected to, only his grief at losing his influx of money and wealth now that the temple is closed down, the tigers removed to a safe sanctuary and no more tourists or their money coming to the temple gates. I am sure his life as he knew it, is destroyed and what a wonderful thing that is. 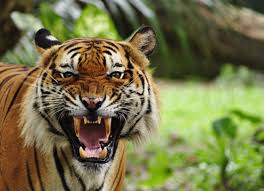 When the authorities first raided this temple a week or so ago, they intercepted a truck leaving the temple with five men, three monks among them and a truck load of tiger bones, fangs and tiger pelts. These horrible products are sold to people for jewelry, knick knacks, souvenirs and other macabre object d' art.  It is truly horrible what these evil monks were up to, but it is as horrible that people buy these items without a care as to where they came from and at what cost. Right now those five men, three of them monks from the temple are under arrest. The investigation continues and more arrests are expected. The saddest thing, is now that it is all out in the open, all of the horrible treatment of these tigers has been exposed to the world, these evil monks and their helpers are still denying any wrong doing. They have been so blinded by the tourist's money and their growing wealth that they are not even able to see what they were doing and how wrong it was.

There are things we can do. Firstly, be aware. If you are someone who travels around the world know that trying tiger meat off a menu is not a rare delicacy, but an abomination. There are only 4,000 wild tigers in existence in this world today. That is bordering on extinction. Buying items made from the bones or skin of tigers simply adds demand that unscrupulous, evil people try to supply. And, it is NOT O.K. for a famous, rich, spoiled musician, actor or other celebrity to own a tiger in their penthouse or mansion. Supporting this by not speaking out and telling them it is not alright, only condones this practice. With social media today, the celebrities of today are quite accessible. You can speak for the tigers, who cannot speak for themselves.

I had a dream of the temple tigers last night. Not the living ones, but the spirits of the ones who have passed on. They surrounded me as I sat on a rock, laying around in the grass, relaxing and they want to be remembered, to be honored. I ask you to do this, in any way you see fit. You may wish to burn a candle in their memory, or to donate to an animal/tiger sanctuary. To speak out against rich, elitist, entitled celebrities who own tigers and other exotic animals without thought or care to what is best for them. You may choose to have a ritual honoring their spirits and the souls of the tigers still alive. Talk about them, tell their story to others, share this discussion, anything to keep their memory alive and to make people aware of this horrible situation. It was only by the complaints of a few people who went out of their way to make sure the proper authorities were notified was something finally done.

Apparently for years tourists and animal activists were unhappy with the treatment of the tigers, but being unhappy and refusing to visit the temple and give your money to the monks did nothing to help these animals. Speaking out, again and again, until the right person hears your complaint is what it took. And now the tigers are no longer drugged or malnourished as some reports stated. There are still those at the temple that say the tigers were better off there and not at a sanctuary, but it is only the temple's monks and helpers feeble attempt to regain their illicit pay check that is behind their words. The tigers are being fed, not being drugged, being allowed to live as tigers and not as pets for photo opportunities and to feed the selfish desires of humans. Finally they are free of the horrors they suffered. There are good monks in the world, but this is an example of some very bad, very evil men masquerading as monks who truly do not know of the teachings of Buddha or of any great spiritual master.

Please honor the memories and spirits of the sacred tiger this week. Do not let them be forgotten! 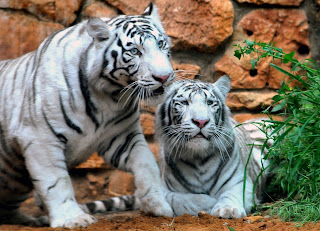 If you know someone who would like my work, please send them this link. If you or they would like to be included on our daily email distribution list send me an e mail with your email address to be included. If you ever wish to unsubscribe to this blog, please contact me and you will be immediately removed from our list.
at Thursday, June 09, 2016